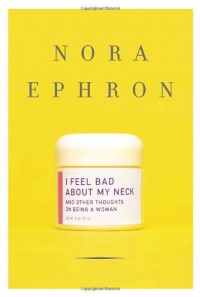 A very humorous, overall-lighthearted book. Within these pages, Ephron bemoans the struggles of aging necks, messy purses, routine personal upkeep, parenting, and not being able to find a once-loved food, among other things, all with wit and humor.

I really enjoyed the book overall, but I am having a difficult time deciding on a rating. On one hand, there were many humorous and insightful pieces (although certainly from a perspective of privilege), which were fun to read in their exposure of women's everyday lives and many of the first-world problems they face. However, I did find some of her jokes and perspectives off-putting. Based on the title, I obviously wasn't expecting a body positive manifesto, but I was disappointed in the fat shaming scenario in "The Story of My Life in 3,500 Words of Less" in which Ephron recounts how she was 126 in college, "having become a butterball". The emphasis on dieting and losing weight as a form of revenge, a thin body being something to flaunt in front of others, was not to my taste. Similarly, her gross trivialization of a homeless woman's experiences in "On Maintenance" was also disappointing. I understood the point she was trying to make, but in my opinion, it had already been made and poking fun at a homeless woman's appearance was unnecessary.

Still, the book came out almost 15 years ago and there have clearly been changes in values since then. The majority of the book was well-written and funny with a few outdated opinions that are certainly harmful but were much more ingrained in the culture at the time.

Despite this, I especially enjoyed the essays, "I Hate My Purse", "Blind as a Bat", "The Lost Strudel or Le Strudel Perdu", and "On Rapture".

The collection ends with "Considering the Alternative", which was heartfelt and beautifully written, providing a more serious closing to an otherwise very lighthearted book.

Overall, I enjoyed this book. Some aspects of it have not aged very well, but on the whole, I enjoyed most of the essays. Well-written and humorous, its a interesting look at various aspects of human life, especially the gendered issues women face such as the pressure for graceful aging.