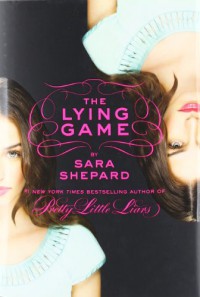 Despite its short length, this book felt like it took me forever to get through. It took me a week to finish and I was only able to finish it that quickly because I started binge-reading it just so it would be over. (Note: I hate not finishing books.)

This is a mash up of Jawbreaker, Pretty Little Liars, and The Lovely Bones. While I wasn't a huge fan of Pretty Little Liars, it was still an interesting read that made me want to find out what happened next. This one? Not so much. I really couldn't care less about any of the characters. They didn't feel real. They were all very two-dimensional and dull.

The story itself was weirdly similar to Pretty Little Liars. I was hoping for something different, but it's the same rich teenage girls being absolutely horrible to each other and everyone else, just with long-lost twins thrown into the mix.

The plot was also surprisingly predictable and the cliff-hanger ending was a big letdown. I think it's pushing it to give this book a two-star review, but I don't feel like I hated it enough to give it one star. I'm sure there is something redeemable somewhere in the text; I just can't think of it right now.

Not a very good read. I'd recommend it to someone who enjoyed the Pretty Little Liars series and wants to read a regurgitated version of it.

I have the sequel to this book (hooray dollar clearance section), but we'll see if I work up the effort to read it.