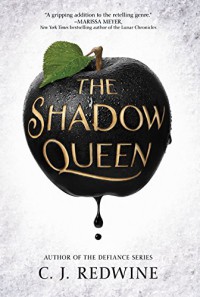 I received this book in an Epic Reads giveaway.

I actually really enjoyed this book. It was a creative retelling of a fairy tale that has been told many, many times. But I think Redwine's adaptation was pretty unique and I like the direction she took it, especially in regards to some of the weirder/creepier aspects of the original version (waking up to true love's kiss, the queen sending the huntsman out for the princess' heart). The story was written in a way that made sense.

I also liked that the romantic element of the story was laid out in a more realistic way. The relationships were not so fantastical that they are completely unbelievable. They develop over time in a way that isn't too over the top.

My favorite aspect of the book was the characters. I think Redwine created some complex characters in this book and I especially liked Lorelai. She was touch and powerful, but still was vulnerable at times without being whiny. She was a great female character with good depth.

The writing was good and the plot was fantastic. It had me hooked from page one.

So this is a definitely great read for people who like fairy tale retellings and are looking for a new take on things.