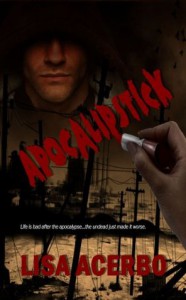 I received a copy of this book through Goodreads in exchange for an honest review.

I think this book has a really unique premise. The idea of others/vampires teaming up with humans to fight stalkers/zombies is really cool. And let's face it, this is a pretty kick-ass title.

Unfortunately, for me, this basically turned out to be Twlight during the zombie apocalypse.

The main character, Jenna, is pretty much a slightly more likeable version of Bella Swan. Throughout the book Jenna is regarded as a fierce fighter, tough, and strong, but in almost ever fight scene (whether against a human, an other, or a stalker) someone comes in and saves Jenna. I think she herself killed only one stalker in the text. The narrator references Jenna's previous kills, but the reader doesn't actually witness them. Also, other characters literally carry Jenna around all the time. I don't think you could ask for a weaker female lead.

Caleb is just as moody and creepy as Edward Cullen, creating another eye-rolling teen romance in the same vein as Twilight, just with more sex.

Despite the major character flaws, the language was amazing. The diction used is outstanding and I have never read better gruesome descriptions of the decomposition of zombies. Acerbo clearly has a talent with words.

Her descriptions are truly inspiring. But for me, the character development just wasn't there, making it difficult to really get into the book. Plot-wise there is enough twists and turns to keep the book relatively interesting, but I just could not get passed the awful characters.