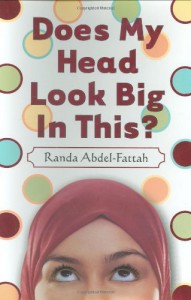 While this book is far from perfect, I appreciate what the author attempted to do. In the book, a teenager fights against ignorance and stereotypes regarding Islam and Muslim identity. Facing issues such as mistaken oppression, the freedom of choice, and flat-out racism, I think this was a good starting point to educate audiences from a young age. I also liked that customs such as wearing the hijab, daily prayers, and Ramadan were included in the text to open the reader up to more information regarding Islam as well as some of the issues Muslim immigrants face such as assimilation and varying interpretations of the religion.

However, a lot of the events felt unrealistic, and willing suspension of disbelief aside, many of the fights and conversations seems unnatural and awkward.

Secondly, the language was surprisingly hypocritical. While the main character expects everyone to accept her choice to wear the hijab as a symbol of her faith, she sure criticizes people a lot. Slut shaming and skinny shaming remarks abound in almost every interaction with females outside of her friend group. With comments like, "They look like they need U.N. aid. One dollar a day. Let's sponsor them" (84) regarding a group of girls the friends see at a restaurant and jokes about eating disorders, it was difficult to view the characters as spokespeople of acceptance of all people. Even within the group of friends, body acceptances issues emerge and it is clear through many fat shaming remarks that females bodies are supposed to look a certain way, regardless of if they are wearing a hijab or not.


So I think the intentions of the author were good and she accomplished many things such as educating young readers about Islam in a way that is interesting, but at the same time reinforces high-school priorities of physical appearances along with slut shaming, skinny shaming, and fat shaming. A lot of the text relies on stereotypes and misguided assumptions. Also, as centric as the hijab was, not a lot of information was given on it regarding why it is a symbol of faith. The main character just calls it a symbol of faith and leaves it at that.

This book is a good start to acceptance and multiculturalism, but is still greatly lacking in some areas.