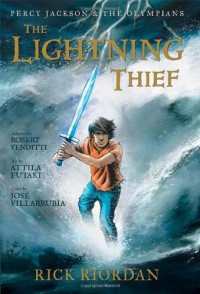 As far as graphic novels go, this one was okay. I liked that different events were included from the book that did not make an appearance in the movie, but plenty of things were still left out (Medusa, Waterland, final scene between Luke and Percy).

The artwork was alright. At times it was difficult to see what was supposed to be happening, especially during fight scenes. As far as complaints against the characters not looking like readers thought they would, this seems to be more of a complaint that they don't look like they do in the movie (Annabeth as a blonde, percy with black hair, Caucasian Grover). This is not the illustrator's fault as it is based on the book descriptions rather than casting decisions for the movies. The depictions look pretty accurate based on the book (and are similar to the artwork depicted in other books such as Percy Jackson & the Olympians: The Ultimate Guide).

A fun addition for fans of the series, but should definitely be read after reading at least the first book as opposed to a substitution for it.